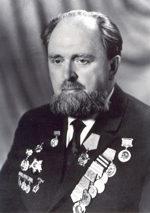 First Director of the Institution

Andrew Kapitonovich Krasin (21.05.1911 – 28.03.1981) is a great nuclear power energy scientist. He was an academician of National Academy of Sciences of Belarus (1960), doctor of physical and mathematical sciences (1955), professor (1957). He was awarded by the name of Honored Science and Techniques Worker of BSSR (1968).He participated in Great Patriotic War. He graduated Tomsk University in 1934. In period 1934-1940 he worked in Siberian physical and technical Institution and in Tomsk University as senior lecturer. In 1945 A.K. Krasin worked in I.V. Kurchatov laboratory.

He was ordered by Lenin premium in 1957 for the development of the first in the world nuclear power plant. He is an author of more than 350 scientific works and special developments, 3 books and several inventions.

MINSK, 27 July (BelTA) – Belarus President Aleksandr Lukashenko met with President of the Kurchatov Institute Mikhail Kovalchuk on 27 July, BelTA informs. “This meeting, as they often say, can become a historic one as it will give an additional impetus to the development of nu...

Belarusian scientists are currently studying issues related to site selection and construction of a second nuclear power plant in the republic. This was announced by Andrei Kuzmin, Director General of the Scientific Institution "Joint Institute for Power and Nuclear Research - S...