﻿ Joint Institute for Power and Nuclear Research – Sosny | About Us 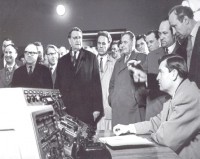 The first Institute Director was Academician A. K. Krasin who had been one of the founders of the world’s first NPP in Obninsk and a Lenin prize winner. By that time the Institute had commissioned an on-site research nuclear reactor IRT-1000 the capacity of which was subsequently increased to 4,000kW; a laboratory for physical capacity reactors and a test building with thermophysical experimental installations. Works on creating a radiochemical laboratory with hot cells for operations with highly- active materials and substances were close to completion.

Since the foundation of the Nuclear Power Engineering Institute and until the Chernobyl accident, the Institute primarily specialized in such basic and applied research areas as material- radiation interaction, development of gas-cooled slow- and fast-neutron nuclear reactors and application of ionizing radiation sources in the national economy.

Assisted by over 150 organizations and enterprises of the USSR in 1985 the Institute created and started-up the world’s first mobile nuclear power plant Pamir-630D with a thermal power of 10 MW (electric output of640 kW) with dissociated coolant and N2O4-based nitrine working fluid.

The plant was to be used as an independent electric power source for mobile and stationary facilities located in poorly accessible regions of the USSR.
Simultaneously, research and design work was underway to design an NPP with a fast breeder reactor with dissociated coolant. There was developed an engineering design of a pilot nuclear power station with a fast breeder reactor BRIG-300 (electric output of 300 MW).

In those years the Institute became one of the USSR’s major research centers for nuclear power. 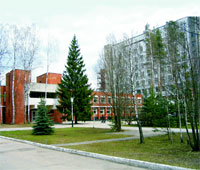 Immediately after the accident at the Chernobyl Nuclear Power Station the Institute became actively involved in solving such critical problems as identifying levels of radiological contamination of the country’s territory with radio-nuclides and exposure levels of the population in affected areas, testing domestically-produced foodstuffs for radiological contamination which played an important role in determining the strategy and tactics of radiological safety activities.

At present the Institute’s staff consists of 380 employees including 15 researchers with Doctor of Sciences degreе and 45 with Ph. D.